So we have had spoilers non-stop this past week but I wanted to zone in on one specific character and his lightsaber. Going back a few episodes I even talked about how much I wanted a Jedi Ezra and his lightsaber, so I thank FFG for answering my hopes! FFG just posted an article this past week with plenty of spoilers and many people have touched on the potential power of Arihnda Pryce.  She seems amazing but I wanted to touch on our new blue hero friend, Ezra. 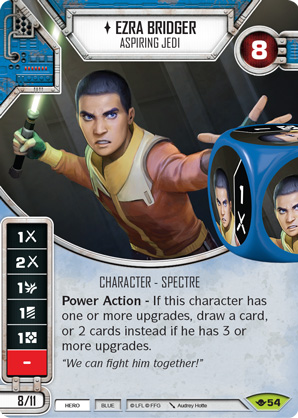 This is a new threshold for heroes in having a character that is 8/11 and a damage dealing character. In that same point slot you only have Maz Kanata and Rose but you do have the new Anakin and Jar Jar at lower points. None of those characters have any real damage output. Maz of course can turn out damage which any upgrade on her but that requires setup. No Ezra isn’t going to turn 1 kill anyone but for 11 points, having a 1 melee and 2 melee is very solid. Villain has dominated this 11 point slot with characters like Bala and Greedo.

So now we have this unexplored area for heroes, where do we go? There are a few options. My mind goes first to either Rey2 and Luke3 with either Profitable Connections or Built to Last. I did try out Ezra with Luke on a recent TTS game against on our of patrons, Mended. It was a really wild build, not firing on all cylinders. I also forgot his Power Action a lot… but that is on me. Mended played Ezra with Obi-Wan which seemed pretty solid as well. Loth-Wolf with Obi is a super annoying. So these options do seem really good but my mind is really to start going somewhere else.

I want to start seeing how Ezra fits in a 5 die start. I don’t think it will be as powerful as the villain 5 die because Bala has an amazing ability along with Talzin for dice fixing. Yet there still seems to be something here with Ezra at 11 and a character like Aayla for only 12 points. That gives you 7 more points to work with. For me my mind goes right to Anakin, JarJar or a Gungan. I do think that Anakin is probably the best way to go for resource generation and a potentially annoying ability. So my theory crafting of eEzra/eAayla/Anakin deck has begun. 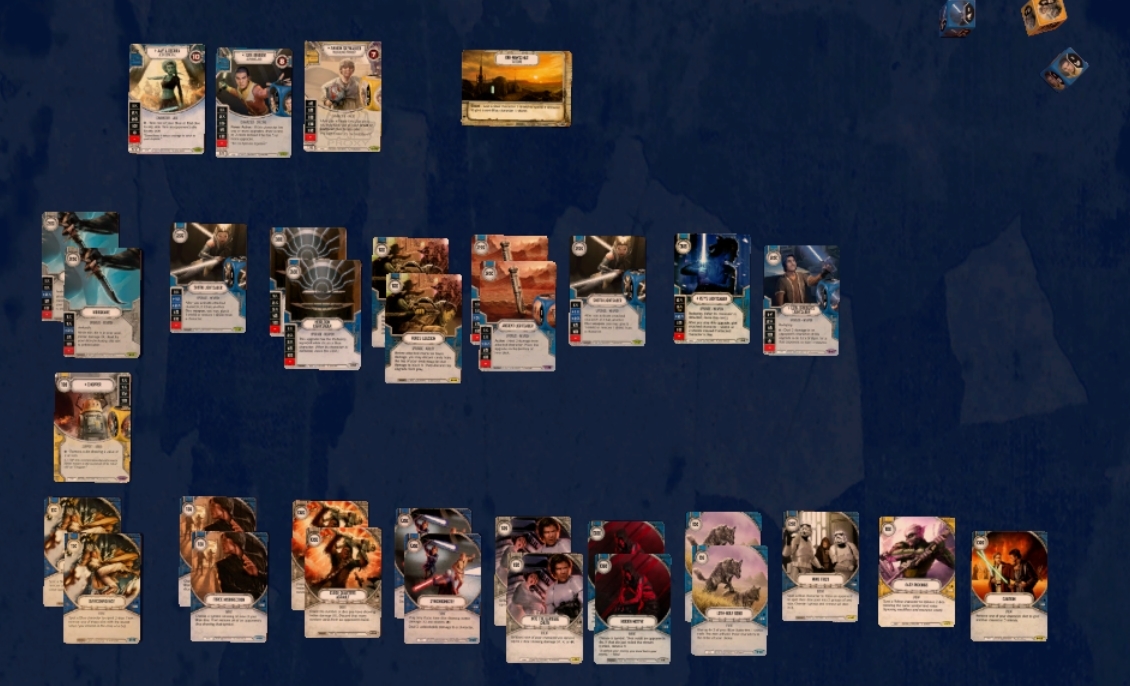 This is my first build of the 5 dice heroes. Definitely can use tweaking as I have exactly 0 games with this deck. My first deck in Legacies was Rey1, Aayla, Wookiee Warrior so I am not sure what my obsession with 3 character blue and yellow hero is but here we are. The fun combo of this deck is activating Anakin to flip Chopper to the special side as a free Electroshock every round.

I am really excited to try out Ezra and keep building decks with him. Definitely let me know if you are trying stuff with him and where you want to see him shine!