Well if you are of the purest bred, American, your Destiny competitive season is in a bit of a lull. NOVA and GenCon flew by and now we wait until Regional season starts. Judging by last year that means I won’t have a Regional until January/February. In the mean time I am lucky to have a local event called CAPA Cup in October and eventually PAX Unplugged in November/December. PAXU has yet to confirm officially it will be a GQ but based off interviews about how PAXU will kick-start the GQ campaign I am willing to bet there will be spot-glosses aplenty there. Right around PAXU the new set, Across the Galaxy, should be releasing setting up a wild GQ. Yet here we are… in September… What do I do?

I am personally all for different formats at weekly events but that can only take myself so far. A no Yoda/Snoke event is probably what peaks my interest the most but also being a competitive player I know that won’t help me once CAPA, PAXU and Regionals come around. I don’t need the most competitive deck right now but is there anything that can compete with the current meta that doesn’t involve Snoke or a milling Yoda? 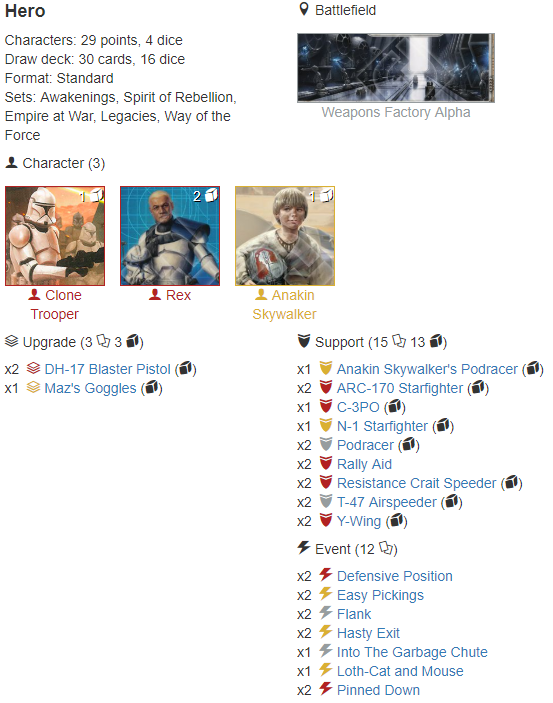 Rex in the current meta is rarely seen currently and only seen in the aggressive list with Maz, where he is trying to roll in all of his characters with Rex’s Blaster off of a Hit and Run or Quickdraw. This looks to use Rex’s ability with Weapons Factory to consistently get benefit from it. The biggest issue with this deck is that it is not consistent in its rolls, to combat that I included Maz’s Goggles and C-3PO to help focus to the sides that I want. Podracers without the Hailfire tank feels a bit bad but the focus with Anakin can go a long way. Being able to consistently get the 2 indirect off without using a focus die can really add up. Even towards the end of the game you can focus to 2 shields on Anakin’s podracer to help stay alive, plus the added mill can annoy opponents. Ani’s podracer might be a little too cute though and doesn’t pull its weight towards my win condition. Overall this deck has been a blast so far but also makes me more impatient for the new set because X-Wings in this deck could be a solid build. This also lets me use my SDCC Rex Promo.

Rather than do another section on hero vehicles I will shoutout eYoda/eRose/Gungan deck that I ran back in July which was a blast but fell off because it was an auto-loss to mill. I know everyone misses this guy a lot. Around Worlds I was playing eFN/eTalzin and had an absolute blast. I think Talzin is still a very good option as it lets you play Profitable but Snoke is obviously just broken and Stolen Intel is not a bad plot to have for FN. I might even run Fortify so I can at least use that NOVA prize for one deck… This deck has 0 testing and I threw it together as I was writing this article so I had something to go off of. Going away from Talzin lets you run more even cards like Force Speed, Doubt, Hidden Motive and some lightsabers. Crafted in theory seems solid since you can roll it in still even with FN being exhausted. Executioner’s Axe seems cute, rolling it in with FN ability, getting a kill and rolling it back in but again, it is a cute idea. The deck seems like it would be fun and worth testing out for Force Speed, All-In, Snoke PA shenanigans. If the meta speeds up then I probably wouldn’t roll with Outer Rim as my battlefield. I know I said no Snoke but this is a two character deck so I will allow myself to cheat! 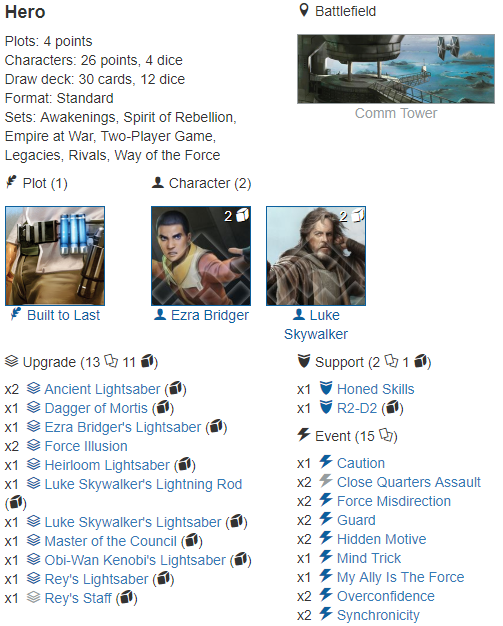 Ezra is one of my favorite characters in Star Wars so I just really want to use him. Built to Last is a really solid plot, the issue is that it is 4 points. Here is probably one of the few decks where it can actually have a home and it can make for some blowout games if you draw right. This was another deck I toyed with in the beginning of the set but dropped it as 20 health was nowhere near what was needed. As always the 30 can use tweaking for the current meta but this deck can be loads of fun. It can be scary having Luke roll out with a Master of the Council, Ezra’s Saber, Rey’s Saber and Obi’s Saber thanks to Honed Skills. Ezra lets you see more of your deck which helps with finding those upgrades to play. I also have an idea of Ezra in a 5 dice start with either Aayla or Yoda and a Gungan Warrior but it just seems too fair.

So these are probably the decks that I will mess around with as I wait for the new set to drop. They seem like they could pack a punch but are clearly a bit away from those Snoke vehicles and Aphra decks. I’d love to hear what you all are running while you wait for the new set as well!