This past May, as Way of the Force was about to drop, I wrote an article discussing what Legacies cards I was excited to see change as a new set drops, and in particular which cards I thought would get more competitive as more sets came out. Let’s take a quick look into the past and see how I did with my predictions…

Final Moment – Ok I said this was a pipe dream… and it was just that. No one is playing this card. It is bad. I get it. I will try to drop my Red Hero fetish for this article.

Finn2 – I get it. I am addicted to Red Hero. Did Finn2 become popular with great partners like Cassian? Nope he didn’t. But I still like him a lot of casual destiny!

Lookout Post – Nope no one is playing this card either, but my point for this card was to say that indirect damage decks and cards with modified indirect damage sides would become more viable as more indirect cards came into the meta. Did this happen? I would say yes, given there is a fair bit of indirect damage decks that are viable, even the Battle Droid +2 side plays a big part in decks. But with the battlefield stipulation, this still is not seeing play.

Aphra – Yay I got one!! Obviously Aphra blew up. Tommy instantly became a huge fan and began thinking about all the possibilities and character pairings and eventually landed on the deck that a lot of others did as well, Snoke/Battledroid/Aphra. This deck has had crazy success and if I had to take any deck to a tourney I really wanted to win, it would 100% be this one.

I really enjoyed writing the last article. It got me thinking about where the meta might be going, and what cards I should keep my eyes on. Obviously this is all just prediction material, but still I find value in it(and it is fun to look back after the meta has been formed). So with Across the Galaxy releasing soon, I decided to once again look into the previous set for some gems as we move onto the final set of the Legacies Cycle. Very few cards have been revealed thus far, but I will do my best to make some predictions! 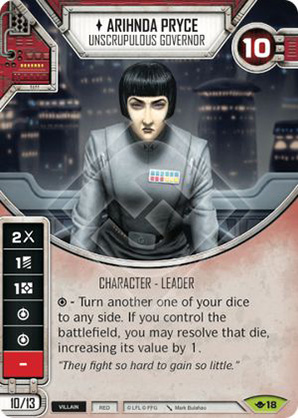 Arihnda Pryce had a lot of people feeling hyped for Red Villain, me included. Dark side was finally getting special chaining, and she just seemed like an overall worth it support character with a solid health pool, great point cost, and good die. So what happened? Well Snoke happened. Snoke hit the meta hard, and still is doing so. His power action is absurd, and he provides a deck with Blue, which right now has way more utility than Red does. So why am I including Pryce here? Well for one, I think the Balance of the Force hammer is winding up a swing for Snoke, but also if another villain comes out with specials, Pyrce will instantly get looked at. Even neutral Han3 or Beckett seem like decent pairings. I also have high hopes that Red Villain may finally get some love.

N-1 Starfighter has a special place in my heart, since Golden Dice got the honor of spoiling this card for the community. We did not have a lot of bad things to say about it. Its die has some very solid sides, and the special has some serious potential, even though resolving that means you aren’t doing any damage with it that turn. So what makes me think it is gonna shine moving into Across the Galaxy. Quite a few things. 1: Mods. Now vehicles can have upgrades! That means people will be piling resources into 1 support, and the ability to discard that much value is extremely scary. 2: Lando2 and his rebellious droid. Both of these characters seem pretty strong additions to the hero vehicle archetype. 3: The resurgence of Hero Vehicles. This deck was everywhere for a long time, but villains finally had a time to shine with a support deck. That does not mean people don’t still enjoy the hero version and even miss it! 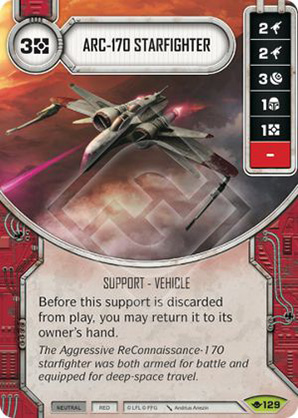 ARC-170 Starfighter might be a card to keep your eye on as the meta evolves as well. There a few reasons this is making my list. The first is vehicle decks may be making a comeback when set 6 drops. The second reason would be based on if vehicles again become popular once again. If the meta shifts that way, players will adjust, and one adjustment may possibly be the addition of support hate like the N-1. This thing has a great response to that hate. In a deck of mostly small vehicles (which may become very popular with the upcoming TIE and X-wing fighters coming into the game and breaking the “2 of” deck building rule)this may be the biggest vehicle on the field, and it sure feels bad to use support hate on a card like this, that will just bounce right back to the players hand. They do lose the resources, but getting the card back to your hand could be huge in certain match ups. 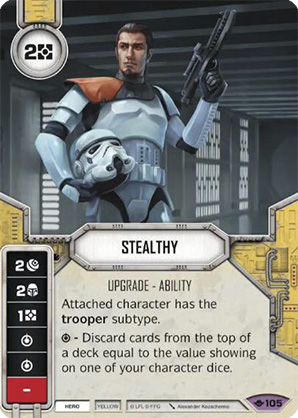 Stealthy was the most frustrating card that got teased prior to the release of Way of the Force. I was so excited to see what other cards would interact with the various subtypes that were being introduced. But… we got nothing. The first half of this card’s ability is literally nothing. But is Across the Galaxy the set that makes the first half of this card actually do something?? I sure hope so. The dice sides are interesting but nothing overwhelming, and the mill ability seems solid but there are better options. And to make things even more frustrating, its a fricken legendary!!! This card desperately needs its text to finally become relevant, so I am putting it here as kind of a long shot, but I am seriously holding out hope for it.

Some honorable mentions that didn’t quite make the list for various reasons are Firmus Piett, Bendu’s Lair, and the V-1 Thermal Detonator. So what cards from Way of the Force are you keeping your eye on as we move into set 6? Feel free to comment on this blog or reach out to us in anyway!