We have a guest article for you this week from one of our Patreons, Smerle. He is his local TO and has some awesome ideas to keep things spicy week-to-week. I asked him to share some of his ideas that you all might want to bring back to your local scene!

Greetings Golden Dicers! (Is that a thing?) First off, thanks to Jack for giving me some space to noodle out some ideas that have been going around in my head ever since the General Grievous and Obi-Wan Convergence starters were announced. I have been running organized play for our store, Mayhem Comics and Collectibles in central Iowa, since around the Spirit of Rebellion meta. I saw a need for someone to take charge of a dwindling group and help interface with our store on what to do. Since then I have run constructed leagues, escalation sealed leagues, theme leagues, a whole gamut of events that were not just focused around Swiss tournaments with top heavy prizes. We have maintained a pretty good core that looks to be adding a few new faces come Convergence. It’s a lot of effort to keep a group engaged, but seeing the group in action during game nights is one of my highlights of each and every week.

So when Convergence was announced and I saw the starters, I immediately tried to think of ways to not only entertain the vets but also on-board some new players at their leisure and continue to grow our little group. The big wrench thrown my way was that for the first time one of these starters was going to be mono Red (General Grievous).

Why Starters?
Much debate has been had online about FFG’s current decision of 24/25-card starter decks versus 30-card, legal decks. For this article let’s set that aside as it’s not something we can change for Convergence and the fact of the matter is that new players are drawn to starter products. The decks are built and come with tokens and a bit of rules to get started. Most new players show up with these starters in hand looking for instruction and for what it’s worth, they do a fine job of teaching the game. I also think these two Convergence starters look to be the strongest we’ve had yet and are very thematic! New players love theme! And let’s be honest, you are probably picking up at least one of each anyway. So let’s have some fun with them while there is a lull in competitive events and attract new players to come out and play!

So here are three starter-based events that I’ve been kicking around and if you pay close attention, you’ll see there is a program at work here to encourage players to keep coming out from one event to the next.

Starter Booster Smash
Some of you who have played Magic: The Gathering may be familiar with or have heard about Mini-Master (or Pack Wars). The idea was simple–you and a friend open a pack and without looking at the cards, add some lands, shuffle up, and play a game! It’s a fun casual way to play with those new boosters you just bought. So how can we bring this to Destiny?

Round/Game 1: Starter Decks Only
Rounds/Games 2-4: Before each round or game, open 1 booster. Remove the character 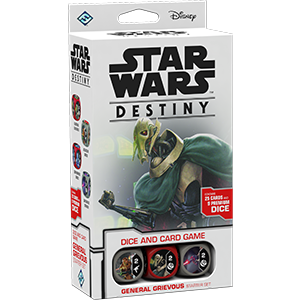 , plot, and/or battlefield cards. Then shuffle the remaining cards into your deck. You may then adjust characters, plot, battlefield as you want. After Round/Game 2 it is possible that decks could be more than 30 cards, so make sure to remind people to check their deck count.

The idea here is a simple event that has a very low buy in and allows all players, but especially new ones, to explore the Starter cards and a few new cards that are opened without having to worry about deckbuilding. Get to playing, ask questions, and talk about all the cool new cards! You can run this as a 4-round Swiss event or just open play and let people match up as they wish. By ignoring the color restriction for deckbuilding (play restrictions still apply, but at least it’s a re-roll at worst), we get around the wrench of the mono Red Grievous starter and players can at least still play with the cards they open right away.

Starter Turbo Draft
With Convergence’s release we will still have the Rivals draft set to use for our Draft or Sealed events. If you are like me, you might be a bit tired of Anakin. The new Allies of Necessity draft set is on its way, but unfortunately will arrive “soon after” the release of

Convergence. In my experience, I’ve also found Draft not to be a very new player friendly experience. Yes, deck power levels are equal, but knowing what cards to pick AND building a deck within time constraints, while also learning the rules and how to play can be a very stressful experience! So how can we have a draft like format with the new starters that is friendlier for new players?

What to bring: One or both starters + 4 booster packs
Deckbuilding Rules: Follow same FFG rules for draft or sealed. Only one starter of choice per deck.
Setup: Pods of 4 people.
Draft: First round, open two packs, pick a card and pass the remaining cards to your left. Do this until you have picked 10 cards. Second round, open last two packs and do the same as the first round. Then put your deck together and play each person in your pod! Allow people to bring both starters, but they may only use one of the starters as their base for the deck and not combine cards from both.

This format is a bit more advanced than the Smash event, so maybe something to run the following week after new players have learned how to play using the Smash event! Again the buy in here is pretty low and they get to reuse their starter(s) they’ve already purchased! It is some deckbuilding, but with only 4 boosters and 20 preset cards it should be a pretty low curve. Also, encourage experienced players to help out! In fact, I would pair up experienced players with new players in each of the 4-person pods. Talk about your picks with each other! Make the group better at drafting, that way your group may be more encouraged to do a full Draft once Allies of Necessity arrives later!

Starter Escalation League
Okay, so now you’ve done a Smash and/or Turbo Draft and are looking for ways to keep your players engaged each week. This is where an “escalation” or “progressive” league comes in real handy! By now many of you have maybe participated in these, but if not the idea is very simple and once again is something borrowed from Magic (use what works, right?). You start with a base set of cards to build a deck from for your kickoff event and then each week add one or more boosters to your pool of cards for the league. Each week you play each other person in the league exactly one time. Also, one critical piece is allowing a “catch up” mechanic for those who maybe are struggling with their pools. Typically this is giving players the option to add one booster to their pool for every third loss.

What to bring: Starters + 3 or 4 booster packs for first week. One optional booster each additional week. One optional booster every third loss.
Deckbuilding Rules: Follow same FFG rules for draft or sealed. You may only use one starter as your base and cannot combine cards from both. You are allowed to change the starter base anytime, as well as any other cards from your pool.
Duration: 3-4 weeks

You may have noticed that the starting pool for this is exactly the same as the Smash or Turbo Draft event! Elementary my dear Watsons! Escalation League serves as a great follow up to either of these intro events and keeps players wanting to come out and build upon that pool! Plus they are encouraged to play as many other players as possible, so everyone is helping each other learn how to play!

You’ll also notice I set the duration to be 3-4 weeks. I have run varying lengths of leagues in the past and what we’ve found is that this is the sweet spot. Any longer and you need to start adding stricter deckbuilding rules to avoid degenerative decks and people with bad luck pools start to feel demotivated to play. You also run the risk of people joining mid-league and needed to pay up a huge chunk of cash to play half a league. Keeping it short reduces these NPE (Negative Player Experience) issues and if everyone has fun, it’s easy to restart for a new month!

I tend to organize each set into a season of monthly leagues. This gives me time to plan for the next month as well as gives our players a new theme or goal to achieve each month. I can also reflect and course correct on anything that didn’t quite work out. With Convergence and no big events on the horizon, I would recommend a season with months of Starter League, Trilogy League, and Standard League, with the last month kinda up to what you think works best for your group (Solidarity Infinite is a promising format, maybe a competitive event or two using the new premium kits as well to wrap up the set). This is also a nice progression for newer players and on-boarding them onto the different formats.

Have Fun and Participate!
So there you have it–three events you can use with your Convergence starters. I will personally be using this Convergence Starter Program for our first month of release. With the pre-constructed deck and good handful of boosters opened by the end of the escalation league, new players can mostt likely now jump right into Trilogy (which will be one set–Convergence) and start exploring more decks and cards with their new group!

You’ll notice I left out any mention of prizes with these. My personal opinion with these type of events are to reward participation over winning. Give out random boosters or prizes if you have them. Ideally we would have the new seasonal “Open Play Night” prize kits with participation cards to hand out each week, which would be perfect for an escalation league! Also consider just working with your store on a good “all in” deal for a starter with packs for people to join so it’s a bit of a discount. Lowering the cost of entry is worth much more than a promo character card that player may or may not use. Just remember to keep it open and inviting, encouraging talk and asking questions! One final tip is that for these type of events I much prefer Open Play format versus a Swiss tournament as it is less dead time for people waiting around. Just grab a partner and play!

Thanks again to Jack and Golden Dice for letting me ruminate about what gets me excited organized play wise for when Convergence drops. I’d love to hear about what events you have planned as well. You can send me those, or any other thoughts or questions, to me on Discord at
Smerle#9345. Happy rolling!

View all posts by Jarred Pine

One thought on “Convergence Starter Events”