Even with a missed cut I figured I would still write about NOVA as I am a content creator after all. If you know me, you know that I often struggle picking decks far in advance. I usually test everything then go with what I feel is a solid meta call. For 2-3 weeks before NOVA I was very much on Satine and was feeling good into most things. I had trouble getting around Jabba, who I thought would be everywhere with his EUROs showing. About a week before, BobbySapphire posted a Palpatine/Watto list in the Hyperloops discord which is for patreons only. I have always been a big fan of his deck building strategies and the decks he creates as they favor my play-style of two wide such as Sabine and Rey Aayla. So I grabbed the list, ran it into the meta and came doing well, above expectations. Not that I didn’t trust Mike’s evaluation but I had become so settled on the droids meta, I was hopeful but cautious of trying something new. Palp really creamed Jabba (just wait for later in the post to laugh at me) and had a solid matchup into Satine. It struggle vs Chopper and auto-lost to Han droids.

With EUROS dominating with Jabba and a lot of Loopers going to this event, I figured Satine and Jabba were going to be everywhere and was more than happy bringing Palp even with the Han matchup. It almost felt every deck had that one bad matchup anyways. Bringing this also helped me not have a bunch of mirror matches which is always a plus for me. I was very happy with my choice to bring this deck, as well as my teammates Brian and Flockton who both 5-3’d as well with Brian dying in the 5-2 game like me. Here is the list: 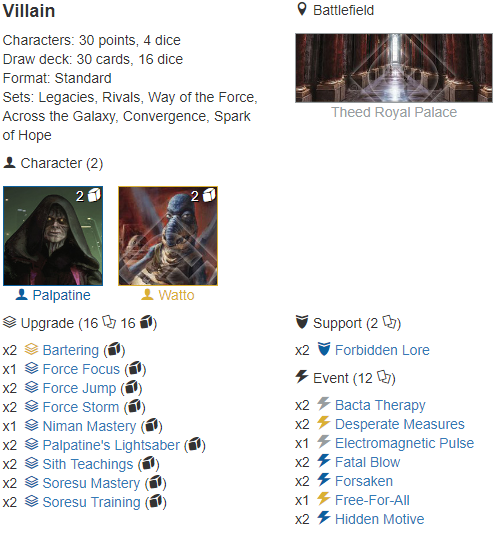 The last minute changes I made was adding a Free-For-All and a EMP. I did not play the FFA all day as I usually had other outs or didn’t draw it and the EMP was clutch vs all the droids I played.

Sat down and got the Satine matchup right away. I learned a long time ago that R2 was the man to go for, so that is what I did. I took him down quickly before it got crazy and then did a Fatal Blow to snipe 3po. From there I wrapped up Satine. That might be a similar story in the following matchups but with Soresu Training, Mastery and Jump I can really just tank up and bide time until I can reach for a big Fatal Blow or close with a FFA.

Another droid I wasn’t looking for! Very similar matchup with a similar tactic. He did take the route of disrupting me but I was able to link up Watto’s +2 resource side to get my ramp going. Palp’s saber is also clutch in spring-boarding you to 4-5 upgrades. Similar in where I killed R2 and did a Fatal Blow for another kill.

Well here was a matchup I was hoping to save for round 7 or 8. Jim was from Kentucky and was great meeting him. He is from Dhaus’s local (Jedi Trails) and we got to joke about how Dhaus keeps dodging me. Jim took the correct route on taking his BF as he won the roll-off and then disrupted me for his first action. Watto again came up clutch in getting me resources for a Bartering to help me ramp up even more. I was able to drop 3 upgrades even with the disrupt. This let me overwrite for a Palp’s saber and really get my ramp off. I had to overwrite as he continued to disrupt me. He struggled as he never saw a Riot Shield or Salvaged Arm before I killed Chopper. Palp really struggles if you take his cards and resources. Eventually I was able to close out the win as I kept taking shields and preventing him from doing meaningful amount of damage.

I just love droids! So the gameplan was the same. This was a bit more worry-some as I did not find DM in my opening hand which let him get Entourage out and tutor a Hired Muscle. Playing against a HM can be very stressful as it does a lot of things to hurt me, damage, disrupt or discard. He also played a Scruffy which I wasn’t prepared for, I got greedy in hoping to make him use a focus on his Entourage die before I DM’d it round 2 but he then Scruffy’d for event. Also did it later before I could play Force Storm. Eventually this game went to time behind Palp shields and my opponent taking his time at certain points (not a complaint just a statement). Did a Fatal Blow to end the game and get ahead on damage to win on tiebreakers. My first ever game that went to time!

Round 5 vs eSatine/e3PO/R2/Fateful – Honestly Sarcastic 4-1

Joe is a great player and deservedly won the tournament, I was one of his many casualties along the way. I felt I played the game well, didn’t draw DM round 1 which let him get his Entourage game going. He tried to bait me out with a Hired Muscle and Fickle, but joke was on him! I couldn’t do anything! He focused to the resource on Entourage to keep his ramp going when I really should have done Watto’s PA to get him off of it but I didn’t. Was just a play I missed. The rest of the game was really tight, coming down to him getting exactly lethal on Palp, where if my Mastery hits a special I can live to the next round. Was a really great game and congrats again to Joe for winning!

Someone please make the droids go away! This game was vs another great player, Manten from ABG. This game I did start with a DM and was able to get rid of his Entourage with it. I had a great first turn but he was able to climb back in. This game was a big display of how well Palp can make shields as minimal damage got through. I was able to Fatal Blow for 7 on  3po to kill him but eventually this game went to time and I won on tie-breakers as I did Bacta Therapy in the final round to heal 5.

I feel so close to  getting my seat in Day 2 and I just need 1 more win. Yet here comes the matchup I did not want at all. It was against Chris T who runs TopDeckTCG who had played in our local, great guy but hated to see his deck! It started out like most of the Han games had gone with 5-6 damage into Palp. Luckily I could stop the disrupt and ramped into 3 upgrades and then did a Bacta to put me out of a easy lethal. Next round I had to do a early Fatal to just get 6 onto Han. I proceed to punt the game from here. I had another Fatal in hand and Palp on the 2 melee. I could’ve claimed as we were on Mean Streets to do the Fatal Blow to kill Han and change the game entirely. Instead I missed it, rerolled a few times looking for a resource only to get destroyed by a Flee The Scene off a claim. Chris played well and made Top 16!

Here it is. The matchup I wanted. The one Palp had stomped all in testing. I get nervous as I draw up as I do not find a DM, instead have a Fatal Blow and FFA in my first hand. Not the most ideal starts but I had a few abilities I could play and just soak up the damage. Well the game keeps going and I can’t find my DMs or Bactas. His board state was 2 Entourage, a FIST, a Fickle and a Hired Muscle. This was out of hand and eventually his damage outpaced my shields. It was absolutely soul crushing to look and see that both DMs and Bacta were at the bottom 10 cards of my deck, but things happen and my opponent played well.

Noting like 6 Satine Droid decks to really get your blood flowing right?

Well I started out 4-0 and gave hope to people who love 2 wides and then I punted against a Han deck, lost to the champion and got burnt by the cards. I do have to say I felt my play was tight but missing cut after starting 4-0 is a real eye-opener. I felt confident when I sat down vs Jabba last round which means my hubris probably lead to my downfall. I’ve missed cuts before but this one really stung and hit my pride as a player. It was a good field but needing to just win 2 more games and missing out  really lights a fire under someone. Hopping I can come back stronger for Worlds!

Shout-out again to BobbySapphire for giving the best decks and I wanted to shoutout a patron of ours, Landocal, as he gave us some sweet token boxes for our over-sized stream tokens. On top of that he wore a GDP shirt for the tournament!

Thanks all for reading!