Hey peeps! I am day-dreaming about the day Convergence drops and we can all start making some decks, so I figured why not just type up my day dreams! So if the set came out tomorrow and what has been spoiled is all we are getting, here is where I would start… 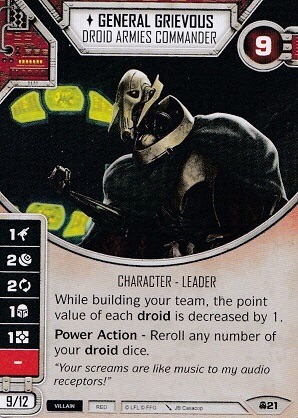 I think a starter deck would be a good place to start. This might be the first Grievous that is gonna see serious play. It is kind of sad it is not the beat face Grievous we all wanted but the tactical commander Grievous is still cool. The reason I want to build around this guy is because of my love of the droids that are already in the game, as far as supports go. Now his first ability won’t affect that, but his power action will let you reroll any number of your droid dice which can be any type of card. My brain right now wants to start somewhere with Aphra. So you could do eGrievous/Aphra which leaves you with 7 points left or 8 points of droids. But you could also do Grievous/Aphra/BD/BD which is a pretty damn funny 4-wide deck. You could even ignore Aphra completely and just go power house droid characters along side him. If you are going that route, you have to be bringing the E-5 Carbine Blaster. With 4 damage sides and redeploy while on a droid I can’t think of another 2 drop weapon I would want. This all boils down to me feeling like you can pick up a Grievous starter and really build a variety of decks, that all would feel somewhat competitive, and that is exactly what a Starter Deck should offer.

Enfys Nest seriously intrigues me. Firstly, I loved the character in Solo and in general I tend to lean toward Yellow in Destiny, since that is normally where the jank lies. (I still love Red Hero as well, we just have not seen much yet this set to be hyped about) I cannot tell if this character is going to be terrible or find a niche that she really works in, but I am obviously hoping for the latter. It really depends what kind of scoundrel dice we see come out, and what possible character pairings we could see with this 18 point elite character, but with her being neutral there has to be a solid amount of options. Including those cards from her first ability can offer some powerful options regardless of your deck affiliation. I think a strong use of her power action will be resolving resources for free, maybe with a partner like Lando2? I just do not know if that deck works out starting with only 3 dice. Obviously resolving her damage for free will be nice, but is that really strong? I just am not sure. Either way this card has jank written all over it and I am excited to see what other scoundrel based cards we get to play with, and what character pairing I finally land on with her. Either way, she is hitting the table in some manor. Apparently a lot of people misread this guy, including myself. For some reason I swore he said “activate.” But because he does not, I think this guy is amazing. We all know getting to roll a support die in multiple times in a round can be really powerful (Fist and Shadowcaster), and Wat can apply this effect to any support you want, he is just limited due to it being a power action. The indirect is his worst die side besides the blank and that is fine, because having 2 focus and 2 resources is exactly what you want in a support deck, plus 9 health is solid for the 9/12 slot. I really want to abuse the Assassin Droid in order to maximize his effect, and Wat allows you to do that nicely. Pair him with Aphra and it is even cheaper to do so! But I am sure Wat will find his way into a lot of various vehicle based decks, he just seems incredibly versatile. The dumbest Star Wars characters always make the best Destiny Characters…

Maz1 was one of my favorite characters in the Awakenings cycle, but can Maz2 live up to the first iteration. I don’t think this Maz will have the same impact, but she still intrigues me enough to want to build around. Her power action has a lot of versatility, and if you use it after your opponent has claimed, they have less options. If they choose to turn one of your dice, you are going to reroll any number of yours and deal them 1 damage. So what most likely is going to happen is they will deal you 1 indirect, and you will get a card draw and a reroll. If you are playing a cheap support deck, digging for more cards can be very important, and in a lot of cases you’d take 1 indirect for that. Or just bring bubble shield so they don’t get value from choosing that option. Besides all the craziness that is her special, the die and health is pretty rock solid. 13 points for 10 health and 2 damage sides is good, not amazing. But the rest of the die is good and the power action can definitely be abused. Turning your opponent’s dice mid round would be great too, and a lot of tricky situations are going to come up using Maz. I am definitely going to field her and see what chaos I can cause!

So what are some things you want to get on the table as soon as possible? I am sure many of you want to sleeve up some solid blue decks, since there are some very interesting characters on their way in that color. Let me know and until next time, stay fresh.